If You’ve Been in Care…

If you’ve been in care, the likelihood is you’ve probably also been excluded from school. And at the heart of that exclusion is something that is familiar and often used to define the care experience. It clings to a person, unlike the child who drags their teddy; like dragging a dead animal. Exclusion is what is experienced by being removed or rejected by family even if that was the best thing for the child at the time. It is linked to the myth that ‘bad’ children are put into care and follows that ‘bad’ children are excluded.

I was eight years old at primary school and pulled into the headmistress’s office. I was told I was the ringleader of the ‘gang’, and that if I didn’t pull my socks up I would find myself in serious trouble. I didn’t have a clue what was going on. We all knew who the leader was in our group of friends and it certainly wasn’t me. At playtime, S decided who would be the goody and who would be the baddy. We were either wizards flying around the playground hunting evil or else witches being hunted. I do remember a girl whose life was being made a misery because she smelt. It was S who led the campaign. I didn’t take part in the name-calling and would speak to her even when the others didn’t. I knew that it could quite easily be me. It was probably this that alerted the headmistress something was afoot in the children’s playground and why I ended up in her office.

Exclusion is part and parcel of the language that surrounds a child in care, it surrounds and obscures elements of self. Like people in pea soup fog all that remains is an outline, a stereotype without substance or personality. The headmistress’s need to single me out was probably also based on her own unconscious and conscious bias. Little girl in children’s home; must have done something wrong to have been put there; therefore she is the ringleader. And so it starts.

But for me things didn’t really get going until I was in secondary school. Secondary school is a whole different ball game. There is a hierarchy and if you are not part of the ‘in-crowd’ with the latest clothes and equipment, you are bottom of the pecking order and you are going to get severely pecked. Coupled with this if you’re a kid in a children’s home already labelled the ringleader, there isn’t much hope. There are of course ways around and out of this. Blatant disregard, a sprinkling of madness and possibly humour. I chose all three.

When I arrived at secondary school in 1969, aged eleven; I was still pretty much an innocent. I hung out with the nerds, we got on relatively well and all loved reading. They weren’t interested in the ‘right’ clothes and still used their imaginations at playtime. Boys hadn’t even crossed my radar at that point. Though that soon changed.

As I settled in, my core group changed and so did I. At lunchtimes when friends went to the local shops I could only walk alongside always struggling with that constant feeling of lack – money; the right clothes; the right shoes; the good enough home life.

In lessons, I asked questions which drove the teachers up the wall. But why? I would say. Why is that? Either they couldn’t answer or they didn’t want to. I was serious, mathematics just didn’t make sense to my brain. And I drove the maths teacher to distraction. And one day, as if by magic, it happened. I stood up and said something and the whole class laughed. It was my moment of glory. I was liked because everyone laughed at my words. And so the outrageous language and behaviour continued. And then my mother died. She killed herself.

I was just thirteen. I’d had an amazing evening rehearsing for the school production, The White Horse Inn, having been ‘discovered’ in assembly. Standing next to the very dramatic Head of English, who always looked as if she’d just stepped out of a musical, I was giving my very best performance. ‘With a voice like that’, she said, ‘You should be in the Amateur Dramatic Society.’ And so I joined and loved it.

I arrived home all sparkly and enthusiastic. It was dark, the stained-glass door was lit up and I read the familiar ‘Eskdale’, the original name of the house. I was home. I rang the bell and the front door was opened by the most hated member of staff. She took me into the kitchen and made me hot chocolate. I couldn’t understand why she was being so nice. And then she told me. I took myself into the downstairs toilet and ran the taps so she wouldn’t hear me cry.

I was thirteen and I didn’t really know my mum. But I knew what a mum was. When I went to the funeral, I was at the back of the gathering with my social worker as though I were just an acquaintance. I had no place in her family and that never changed. My mother’s death was tragic for them. For me, I was thirteen without many feelings apart from the one overriding one which was, I didn’t fit in anywhere and I was unwanted. So the starting point of any interaction was always from a place of exclusion.

From being the class comedian, I graduated with honours when towards the first anniversary of my mother’s death, my behaviour become more and more erratic – one of those lovely words that was always on my report. Fate intervened and decided I would try to kill myself. I was told by friends that teachers had noticed I didn’t seem particularly upset by her death so I knew there must be something else wrong with me. One particular teacher cornered me in the library and interrogated me. I was almost in tears when she walked off, looking back over her shoulder as though I were a monster.

The day of the anniversary, I happened to be at a friend’s house during lunchtime though we had no intention of going back to school that day. Her parents were away. I’d spotted the drinks cabinet as soon as we walked in. ‘Can I try some?’

‘Help yourself’, she said.

I concocted a pure drink as befitting a drinking virgin. I chose the clear spirits, different varieties of vodka and gin. And I knocked it back in one hit. It was the last thing I remembered until I woke up in hospital the following day, having had my stomach pumped and nearly dying.

The more my behaviour changed, the more my potential was lost. No more long distance running; I was smoking as much as I could. Nobody recognised my talent as an artist so that was lost too. My potential as a writer was left in the English class. I was on a road to destruction. I met boys from children’s homes and we hung out. Some with the loveliest of hearts who I often ran away with but who were already on the long care experienced road to nowhere.

Of course, I was excluded, probably more than once but I don’t remember why. A vague recollection of an altercation with one of the teachers who I had no respect for because of his violent behaviour towards children. I was at the point in my education where I just didn’t care about anything apart from David Bowie and boys. And when I was excluded, unlike other children who just sat at home, my behaviour was deemed so uncontrollable I was sent to see a psychiatrist. There began hours sat in rooms in silence.

For a while I quietened down. The psychiatrist and matron at the home, warned of what would happen if I didn’t. Of where I could be sent or end up. And I knew I had no control over that, so I retreated for a while into my world and read my way to the end of schooling and my time in care. 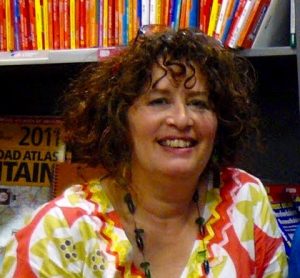 Rosie Canning was born in the fiction section of a Muswell Hill Library. She completed MA Writing at Middlesex and is now a Doctoral Researcher at Southampton University, writing a novel and investigating the representation of Care Experience in Literature.

For the last two years as part of National Care Exp Week, Rosie has co-organised Your Life Your Story. YLYS gives those with care experience the opportunity to explore, create, write and develop ideas in a supportive, encouraging & nurturing environment.